Hello everyone! We hope you’re doing very well, we thank you for the patience you have had these days. We have worked to fix some bugs that affected the gaming experience:

Thank you very much for your support, Love and patience!, We love you <3

Support us on Patreon!: https://www.patreon.com/WitchNightoStudio

While dialogues could use come help... The beta is really buggy just fyi.

It bugs out either while choosing a oppaimon or in a battle which is annoying.

And it needs a better saving system.
The running is just wonky? And there's a lot of things that we are simply able to run into even though we shouldn't able to.

Like others have said, needs a lot of polishing.  These arent neccessarily complaints, but definetly things that need to be implemented

The Save system needs implemented, as well as making some more powerful monsters in Route 2. Grinding your starter to evolve it is very tedious when everything you fight only gives you a tiny amount of exp compared to what you need, and you already finished off all the trainers in the game.

Need to make the moves consistent. When an enemy uses Fake Orgasm, it deals damage to me. When I use it, it only lowers their attack.

The mouse is very buggy when you move, it looks like it's pretty much vibrating

The Bowsette fight needs to be a little more difficult. She's using a 2nd gen monster, and you can beat her using a monster that's barely 1 level above hers. Maybe make her at least the level you need to be in order to evolve, that way you can also show what level you need to be to evolve your monsters

Seriously needs a lot of polishing, The writing is not very good. 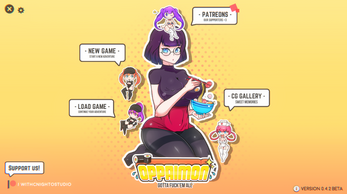 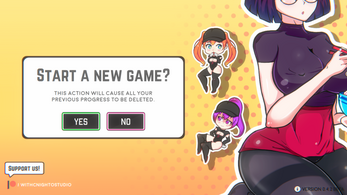