for anyone wondering whats happening with the development, they've abandoned this version and are instead working on a 3d version, although whether or not thats actually being updated or not idk

Is playing as a girl not implimented yet?

i can't seem to get out of the house.

So I have encountered 3 bugs early on my play. The first thing I encountered that is I went back into the lab after the first fight and was able to get another starter. So I got 2 starters. The second was that when I left the area where I got my starter and if I try to go back it starts the auto walk animation of me trying to get my starter so I cant go back into the lab town anymore. The third is that the first encounter with team sucket keeps replaying so I keep battling the two sucket members when I go to town heal and go back. 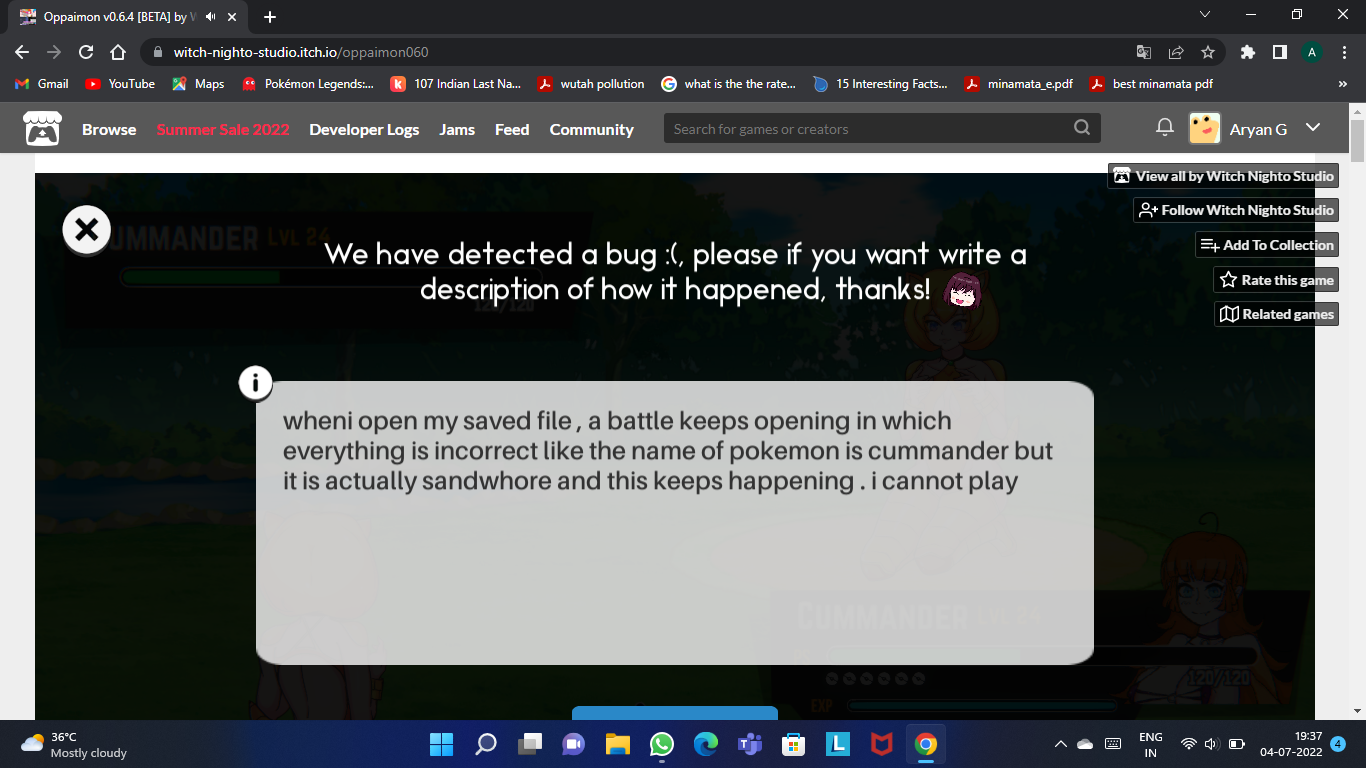 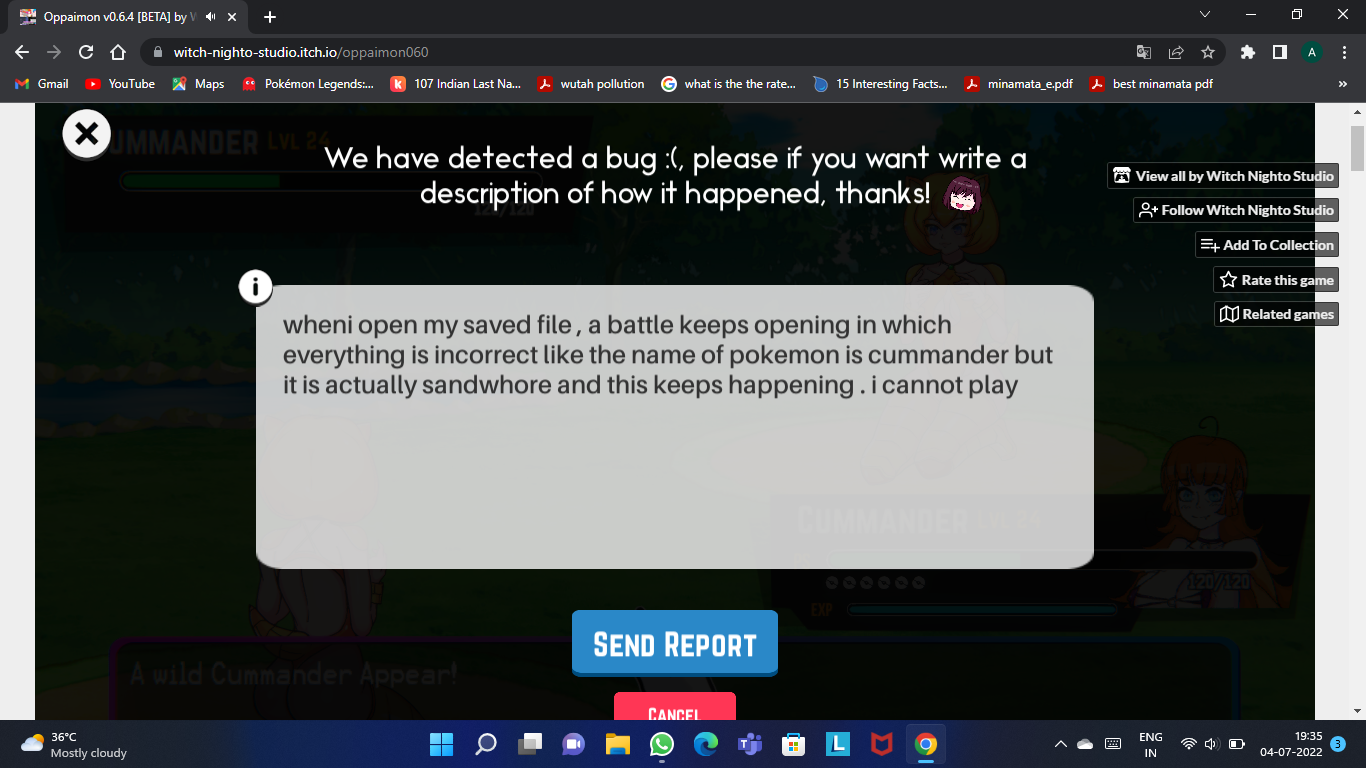 this game is very buggy . i spent an hour levelling up and then i was about to save but used and healing item on my oppaimon . then this pop up appeared saying that they discovered a bbug . i saw on the dim screen behind , the oppaimon was healed but this keeps appearing unnecessarily and when click on either send the report or cancel , it freezes and does not work . my whole hour was wasted . either fix this bug or at least make it so that it auto saves . this literally has happened a lot of times and annoyed the crap out of me . this pop up is more annoying than the bugs themselves

Im having trouble saving the game, what do i do?

This game has potential, really needs polish. the art is pretty weak and the anatomy on some of the girls is outrageous. no girl has tits bigger than her body. that being said the concept is pretty cool. the dev just needs to wring out bugs n stuff

every time i send an report or even hit the cancel button it just freeze the game, and can  you add auto save.

this game looks very fun but evrytime i try to play the game bugs out when the rival goes to pick their starter if anyone knows any way to fix it please tell me.

Im currently stuck in the directly left upward from the start, where each time i try to leave the house i enter it again, how can i get out?? 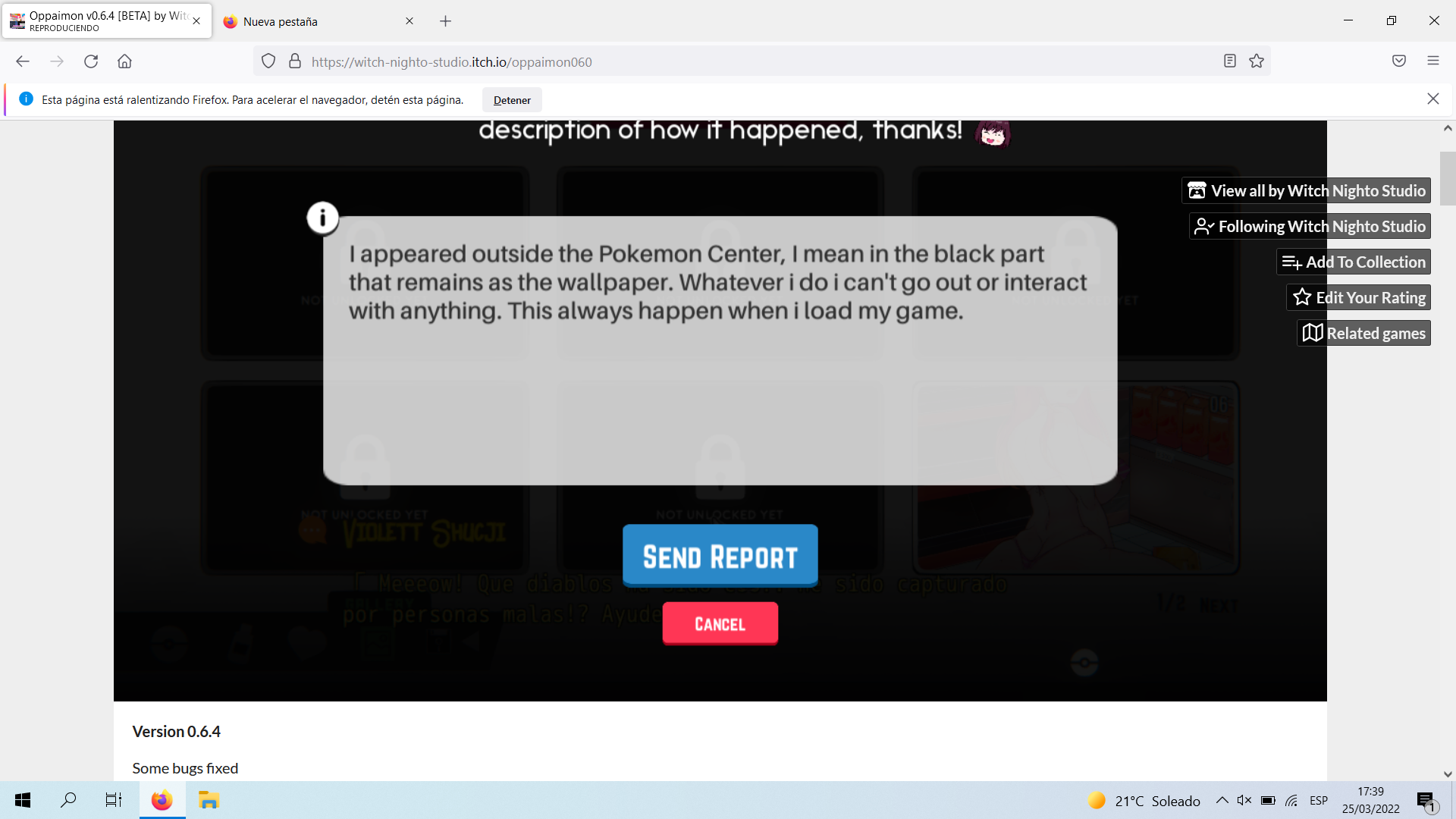 how do i save the game?

How do you save? And fix collisions pls

it is so annoying! when you need to travel fast from this place to another place, you just can't because the trainer keep automatically pick a fight with you!!! Sucks!

how to save in this game guys?

why cannot I not choose the girl option at the beginning do I have to do something?

While battling, when I open the menu, the game totally freezes.
What can I do when it happens?

what are the planned fetishes, if you don't mind sharing them

Very nice concept so please keep working on it, it just needs the bugs fixed.

how do u evolve any mon?

i got an error when evolving an mon (the bird) and now its stuck on a fight scene and when i report it dont report and just say its not responding. i reset the game a lot, even stop playing. and when i came back its still the same.

how do you evolve them

good game! no download :( Edit: P.S takes while to load

Can i play this game in android by joiplay emulator????

According to JoiPlay it's not an emulator (software that enables one computer system (called the host) to behave like another computer system (called the guest)) it's an interpreter (a program that can analyze and execute a program line by line).  So it can't run Unity games because it would to emulate Windows API (certain DLL files) to run. That's Unity games have to be specifically compiled for Android. JoiPlay can only run RPG Maker XP/VX/VX Ace/MV/MZ, Ren'Py, TyranoBuilder, and HTML (not HTML5). Source: JoiPlay

I write better than I speak and I'm a big grammar nerd.

It doesn't let me pick girl

Well I hope they're doing well

pitty that u can have an xp share thing to all your oppaimons, also is there other evolutions or only the 2nd tier?